Born in 1970 in Corfu. Succeeded at the Law School of Thessaloniki, but not graduated.
He studied piano (diploma: Second Prize), along with music theory (composition-first prize).
Ηe  studied piano under the guidance of pianist Valery Sagaidatchny.

He has worked as a conductor and arranger with orchestras:
"REGENSBURG", "YOUTH SYMPHONY ORCHESTRA BUXTEHUDE", "PUCHHEIMER JUDEND KAMMER ORCHESTER" and the great choir and orchestra «SINGAKADEMIE NIEDERSACHEN» for the presentation of «CANTO GENERAL» (Mikis Theodorakis-P.Neruda).

In 2006 he worked in the artistic direction and the organizing committee of the First International Symposium of Choral Music, held in Patras, under the auspices of the "Cultural Capital of Europe Patras 2006".

He has been a music teacher in the Primary Education since 1994.He has participated as a speaker in  seminars and conferences on topics related to music in education.He participated with the children's Choir of the 8th primary school of Patras in the institution "International Music Festival for Youth - Eu Japan Fest", at the start of the European Tour of Kitami Jr. Jazz Band- Shiina Jazz Trio. He participated as an instructor in the "European Project LLP Grundtvig Workshop" (2010 - 2011).

He has collaborated with the theatrical group of kindergarten teachers association of  Patras for the show "WITHOUT HOOP" (Al. Papadiamantis), and the Municipality of Patras ("Carnival of children") as a composer - arranger in children's song festival. He is one of the founding members of the newly created group  PAiTheA, which first appeared in the shadow theater show "THE MAYPOLE OF SHADOW AND COLOURS"

discography:
“THE BUTTERFLY’S SPELL"- (The February 2016 Academia Music Awards)
"THE MAYPOLE OF SHADOW AND COLOURS" 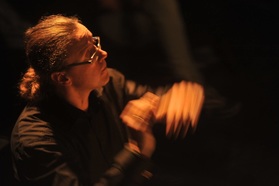